According to the latest UNWTO World Tourism Barometer, receipts in destinations worldwide from expenditure by international visitors on accommodation, food and drink, entertainment, shopping and other services and goods, reached an estimated US$ 1159 billion (euro 873 billion) in 2013. Growth exceeded the long-term trend, reaching 5% in real terms (taking into account exchange rate fluctuations and inflation). The growth rate in receipts matched the increase in international tourist arrivals, also up by 5%, reaching 1087 million in 2013, from 1035 million in 2012. 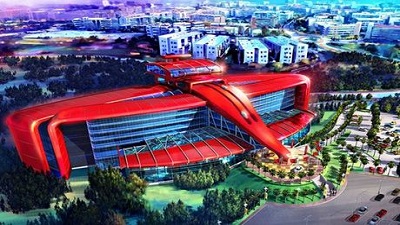 The new branded site (expected to open during 2016) will be the sole Ferrari theme park in Europe  and will envisage a total investment of more than €100 million. Ferrari Land will be built on a total  surface area of 75,000 square meters and benefit from several rides (including the highest and fastest  vertical accelerator in Europe), a new premium hotel with 250 rooms and 5 star service, restaurants,  shops and large simulation areas for car racing.~source~

As people around the world celebrate Chinese New Year, the travel industry is getting ready for the Spring Festival – the country’s most important holiday.

China’s Tourism Academy predicts that tourists during Spring Festival this year will number up to 225 million. And, as the Chinese increasingly opt for international destinations, it reveals that the number of domestic travellers dropped by 2.5% last year.

Italy is their top destination, followed closely by France. Switzerland, Spain and Germany complete the top five most popular destinations for China’s group travellers this year.

"When you get a groove going, time flies. "

"Tourism is directly linked to a country’s reputation. Tourists spreading the word about their experiences before, during and after their trip often function as key influencers in shaping a destination’s external image."

International tourist arrivals grew by 5% in 2013, reaching a record 1,087 million arrivals, according to the latest UNWTO World Tourism Barometer. Despite global economic challenges, international tourism results were well above expectations, with an additional 52 million international tourists travelling the world in 2013. For 2014, UNWTO forecasts 4% to 4.5% growth – again, above the long term projections.

Demand for international tourism was strongest for destinations in Asia and the Pacific (+6%), Africa (+6%) and Europe (+5%). The leading sub-regions were South-East Asia (+10%), Central and Eastern Europe (+7%), Southern and Mediterranean Europe (+6%) and North Africa (+6%).

Cause I am happy!

The Well-Travelled Road Effect: Why Familiar Routes Fly By

As you drive down unfamiliar roads it seems that everything is conspiring against you: other cars, the road-layout, the traffic lights and even suicidal cyclists. You know it’s only a few more miles, but it seems to be taking for-e-e-e-e-e-ever. Accredited by: http://www.spring.org.uk/